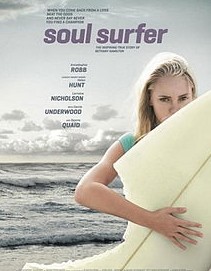 We were watching Soul Surfer (2011) as a family recently.  We decided it would be good to watch a “Christian” movie occasionally.  It may be awhile before that happens again.  Spoiler: there’s a shark.  While we didn’t love the film, it gets a lot better post-shark and the story of Bethany Hamilton (played by AnnaSophia Robb) is amazing.

Early in the film, the character played by Carrie Underwood (Sarah) is teaching a lesson to the church youth group and she concludes her lesson by quoting one of her favorite verses, Jeremiah 29:11: “‘For I know the plans I have for you,’ declares the LORD, ‘plans to prosper you and not to harm you, plans to give you hope and a future.”  At this point I cannot contain myself and let out a primordial scream.  Then I pause the film and apologize to my family for my inappropriate behavior.

Before I launch into my diatribe, let me start with the positive.  A film is quoting the Bible. (Apparently, there was a controversy in the filming about whether to state that the quote came from the Bible; see the Wikipedia article).  Not just the Bible, but the Old Testament.  Not just the OT, but Jeremiah.   That’s good.

I’m tired of hearing Jeremiah 29:11 quoted out of context.  (I’m sure Carrie wanted to give the full context, but she was over-ruled.)  If you hear someone say, “I’m going to share with you a verse from Jeremiah” you should be able to finish the sentence for them.  If there were a competition for which verse in the Bible gets quoted out of context the most, it would have to be Jeremiah 29:11.  Since everyone quotes it out of context, if you were the first to quote it in context, you’d get to say something original.

I’ll blog about the context and how understanding the context makes the verse more powerful in a few days.  (Click here for Part 2 and Part 3 of this series.)

What other Bible verses are frequently taken out of context?