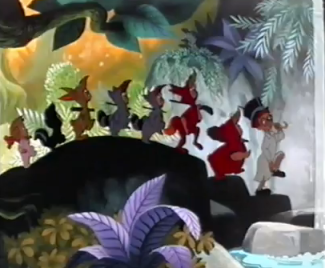 It’s been a few years since I’ve heard this song from Peter Pan (I’ll never admit to singing it), but it’s embedded into my memory banks.  Silly?  Yes.  But appropriate for this verse which focuses on following our leader.

But who wants to follow these days?  Leadership courses are taught everywhere (including my seminary, Biblical), but no one teaches courses on Followership.  People want to be leaders, not followers.  Being a follower even has negative connotations.

Yeah, but following the leader is a big theme in Scripture.  What’s the first thing Jesus says to his disciples, “Follow me!” (e.g., Mark 1:17; 2:14).  The tag-line of Biblical is “Following Jesus into the world.”  My brother Rich wrote a book, Following Jesus in the Real World (IVP, 1995).

The psalmist here understood that following God’s lead is crucial for people who are in relationship with him.  It’s clear that following is similar to obedience, but following is more relational than obeying.  Following suggests the follower is going the same direction, along the same path as the leader.  That certainly seems to be what’s happening in this psalm as the psalmist asks God for leadership in the path of obedience.

In the Hebrew, this verse begins with a Hiphil imperative, which begins with the Hebrew letter He (pronounced “hey”).   Seven of the eight verses in this section (33-40) begin with a Hiphil imperative.  When a verb appears in the Hiphil stem it usually makes the verb causative.  The Hebrew verb for “come” in the Hiphil stem means “cause to come”, or “bring.”  So the word translated here as “lead” could be translated literally as “cause me to march” in the path of your commandments.  Sounds like a forced march.

The psalmist requests help to go on a forced march in the path of commandments.  That doesn’t sound very attractive.  And yet, the psalmist delights in this path.  Delighting in God’s laws is a huge theme of this psalm.  The word “delight” appears 10 times in English versions of this psalm (119:14, 16, 24, 35, 47, 70, 77, 92, 143, 174).  The psalmist understands that God is leading the way and even though the way is hard, it leads to blessing and to deeper relationship with God.

God, help us follow your lead and give us deep delight in you and your word.