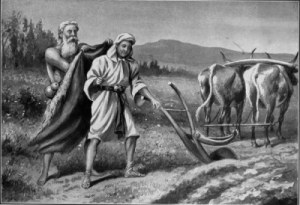 Last time we saw Elijah trash talk Baal’s prophets, then slaughter them.  Jezebel then put out a hit on Elijah, who mysteriously flees and becomes suicidal (the other suicidal prophet is of course Jonah (4:3, 8)).  After YHWH told the depressed Elijah that he could replace him with Elisha (changing the plaque on the door would only involve a few letters), Elijah perks right up, finds Elisha and throws his mantle over him.

Some scholars think this mantle-toss counts as an anointing, but as anointings go, it seems pretty lame and Elijah’s words to his potential apprentice aren’t exactly encouraging–“Go back again; for what have I done for you?” (1 Kings 19:20).

Elijah disappears for a chapter (1 Kings 20), but after Jezebel orchestrates the death of their neighbor Naboth so her husband can take possession of his vineyard, he is called into action again by YHWH for some high quality trash talking (1 Kings 21:1-18).

YHWH tells Elijah to inform Ahab and Jezebel that dogs are going to lick up their blood (1 Kings 21:19-24).  During his interaction with Ahab, Elijah also tells him that if his family members die outside the city, the birds of the air will eat them.  That’s some nasty trash talking.  I’m still waiting for a good Christian book store to sell a poster of canine blood lickers and avian flesh pickers.

I’m sorry this is so graphic, but it is in the Bible and Paul tells us that “all Scripture is inspired by God and profitable for teaching” (2 Tim. 3:16).

So far, we’ve seen trash talking from David, Elijah and now YHWH.  So, why is trash talking in Scripture?  I’m still waiting for a good answer to this.  Maybe we don’t really think trash talking should be in there?  Or at least it’s not profitable for teaching?

We’ll have a few more installments from this OT trash talking series.