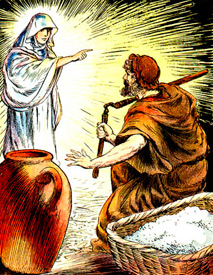 Last time we talked about how Gideon thought he was the least and the weakest (Judg. 6:15) so he was convinced that there was no way he could deliver Israel from the Midianites.

Interestingly, YHWH doesn’t correct this impression.  There’s no, “But you really are special, Gideon.  You shouldn’t say that about yourself.”   (Stuart Smalley would say, “And gosh, darn, people like you.”)  That’s the sort of insipid thing we typically say when trying to encourage someone.  God doesn’t worry about that, because it doesn’t matter if Gideon is the least and weakest or the greatest and strongest.

YHWH says to Gideon, “But I will be with you and you will strike down the Midianites.”  God tells him not to worry about his supposed inadequacies, but focus on God and his presence.  Previously, the text has called Gideon’s dialogue partner “the angel of YHWH” (Judg. 6:11, 12) and referred to YHWH in 3rd person language (YHWH appeared to him, “YHWH is with you”).

But at the moment of Gideon’s call YHWH speaks directly to Gideon (Judg. 6:14) and now the promise of divine presence isn’t expressed in 3rd person terms, but 1st person–“I will be with you.”  Not “he’s with you” but “I’m with you.”  Gideon should have known God was with him because he was talking with God.  But for some reason, Gideon wasn’t aware of what God was doing.  Sound like anyone you know?

Instead of telling someone who is discouraged that they are special, perhaps we should just remind them that God is with them.  Surprisingly, even as Gideon was chatting with YHWH/an angel of YHWH he still doubted that God was present (Judg. 6:13).  Have you ever said, “If only God spoke directly to me, then I’d know what to do?”

Yeah, that didn’t work for Gideon, at least not at first (and he’ll continue to doubt along the way).

Why is it more powerful for people to hear that God is with them, than that they are special?