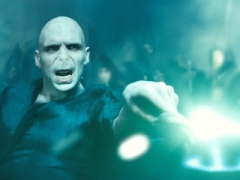 (Just to be clear,  the psalmist isn’t Lord Voldemort (he’s fictional).  But blog titles are supposed to be provocative.)

At dinner with my family last night, I asked which fictional character is most associated with cursing?  (Cursing not as swearing, but as the opposite of blessing.)  They were stumped, so I gave them a few clues.  Eventually Shannon said, “Lord Voldemort”.  (If you’ve been living on another planet for the last decade, Voldemort is the evil magician who keeps trying to destroy Harry Potter with killing curses.)

This morning in my Psalms class we discussed cursing (imprecatory) psalms so I showed them an example from the highest grossing film of last summer (http://www.youtube.com/watch?v=BcJl2YjFcr0, Voldemort’s the one without a nose).

As we looked at Psalm 139, our class thought it odd how the pro-life psalm suddenly morphs into the pro-death psalm toward the end.  In the middle are the famous lines:

For it was you who formed my inward parts;
you knit me together in my mother’s womb.
I praise you, for I am fearfully and wonderfully made (139:13-14).

That sounds great.  I’d put that on a poster.  But wait…

Not really poster material there.  Apparently, not everyone is fearfully and wonderfully made.  The psalmist utters a killing curse (in Hebrew it sounds exactly like Avada Kedavra).  Has the psalmist become Lord Voldemort?

So, what would you say to someone who’s troubled by the curses of Psalm 139?  (more to come…)