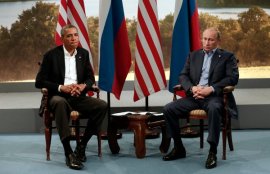 Obama’s recent decision to snub Putin over Russia’s decision to grant NSA leaker Edward Snowden asylum for a year, prompts me to ask the question:

What if marital disputes were handled like international crises?

“You forgot our anniversary, so I’m going to cancel our next summit (no date?).”

“You didn’t call when you said you would, so I’m going to push for sanctions (cut off your relationships with male/female friends?) .”

“You burned the toast, so I’m going to increase your tariffs (cancel a credit card?).”

Do you really think that Putin is going to sit at home and say, “Gosh, I really wish I could be talking to Barak now.  Maybe we shouldn’t have granted Snowden asylum?”

I realize there’s a time to punish, God certainly does that to us, but personally I think the marital equivalents of canceling summits, pushing for sanctions and increasing tariffs would make a relationship go south.   I could be wrong, but somehow I’ve managed to stay married for 22 years.  I know some of you will think I’m naive, but I think people have been saying that about Jesus for 2000 years.

Jesus tells us to get reconciled with our brother and sister, to not let the sun go down on our anger, and to forgive literally 490 times.  During a period while Israel and Aram were enemies, Elisha also healed Naaman, the Aramean general (2 Kgs. 5) and told the King of Israel to fed the Aramean army that had just been attacking them (2 Kgs. 6).  Perhaps Jesus and Elisha have something to say to us about our marriages and our diplomatic relationships

I hope the next time I “burn the toast,” my wife Shannon doesn’t call for an embargo.