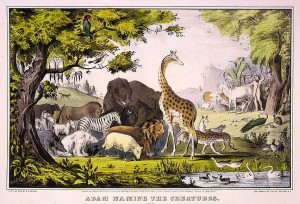 A few days ago I was teaching at my seminary (Biblical) on Genesis 2, the creation of the woman from the rib of the man (they aren’t called Adam until Gen. 4:25 and Eve until 3:20), when one of the students pointed out that the ESV text I was using for class (from Bible Works 7.0; we can’t afford 9.0) was slightly different from her ESV text (from BibleGateway.com).

Who cares?  Well, the change is actually quite significant, but first a bit of background on the ESV.  The ESV (English Standard Version) which came out in 2001, underwent two revisions in 2007 and 2011 (see the history according to Wikipedia) here).  So, the change must have taken place in one of the revisions.

2001: Now out of the ground the LORD God formed every beast of the field and every bird of the heavens and brought them to the man to see what he would call them.

2011: Now out of the ground the LORD God had formed every beast of the field and every bird of the heavens and brought them to the man to see what he would call them.

In the original, YHWH elohim (the LORD God) is forming the animals in 2:19, but in the later version, he had already formed them.  I think I know why the “had” is added– to harmonize the creation account of Gen. 1 and Gen. 2.  In Gen. 1 God makes the plants, the animals and then the man and woman together.  In Gen. 2, God makes the man, the plants, the animals and finally the woman.  So, there’s a conflict in order.  The newer ESV minimizes the order conflicts (they still don’t disappear).  YHWH elohim “had” already created the animals, he’s not creating them (after the man!!).

The two verbs (in English, “formed” and “brought”) in the first half of the verse both have YHWH elohim as subject in the Hebrew are both vav consecutive imperfects (I apologize if that sounds strange) so it doesn’t make sense to translate one with “had” and the other without “had”.

Comparing English translations, the NIV has “had formed” along with the newer version of the ESV but the KJV, NAS, NRSV all omit the “had”.

I was confused about the change, so I decided to ask some Hebrew scholar friends of mine.  Here are their thoughts.  (Feel free to claim your comments, but I didn’t want to “out” you without your permission.)

Scholar #1: There is no morphosyntactic reason to prefer the past perfect (“had formed”); the usual function of preterites (wayyiqtol) being chronological or logical sequence/dependency.  Although we might suspect that a preterite is summative (cf. (perhaps) the verbs in Jg 4.23a-24a), even these can also be read as sequential or dependent. This normal “backbone” function of the preterite suggests that the past perfect rendering demands explanation on some basis other than its form.  I suspect that your hunch that this rendering is a deliberate harmonization is correct.

Scholar #2: Scholar #1’s point sounds right.  You might check J. Collins’ Gen 1-4 commentary to see if he speaks to this issue there, since he is the main one on the ESV committee responsible for Gen.

Scholar #3: I looked at the LXX just to see what it had, thinking maybe the ESV rendering had been influenced by a perfect or pluperfect verb. The verb is aorist, but is modified by “eti” which normally signifies continuance of some sort. So a translation might read “And God was forming…” or something similar.

Scholar #4: It’s fascinating that the ESV takes that step of conforming the apparent order of creation in 2:18-12 (man, beasts, birds, woman) to the order in Genesis 1* (birds, beasts, man-and-woman)–but doesn’t modify the Genesis 1* order in 2:5-8 (man, plants). Perhaps that’s why it renders ארץ as “land” in 2:5-6: according to the ESV reading, plants could have already been created, just not in the land/Eden that YHWH God had designated for the man he was about to make.

Thanks friends for your insights.  More Hebrew detail than my typical posts, but interesting to those of us who dig this stuff.

I prefer the original ESV (and the KJV, NAS and NRSV).  My reading of Genesis 1 and 2 doesn’t require them to agree on the order, but that’s another story.

Any more thoughts on this subject?