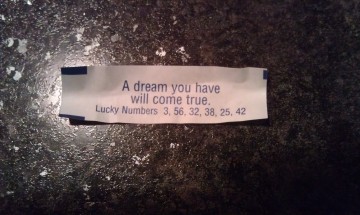 Do you ignore your dreams? Christmas is a good season to pay attention to them.

Do you know where the highest concentration of dreams occurs in the Bible?  (Hint, think Christmas…)

It’s in the context of the story of Jesus’ birth, but only in one of the gospels (more on that soon).

Have you ever thought about the expression, “It’s a dream come true!” The logical connotation of that phrase would suggest that the vast majority of dreams do not in fact come true. It surprises us when it does.

Because we don’t take them seriously, most of us don’t pay attention to our dreams. We assume that our subconscious just imports events from our awake-world into our sleep-world–what we just watched, what we just read, what we just ate (particularly when we dream of a dancing burrito).

Whenever dreams are talked about in Scripture there’s no surprise, people assume the dream should be taken seriously since God speaks through dreams.

Three books of the Bible contain the vast majority of references to dreams: Genesis, Daniel, and Matthew. The dreamers of Genesis include Abimelech, Jacob, Laban, Joseph, the cupbearer, the baker and Pharaoh. In Daniel it’s Nebuchadnezzar and Daniel.

Curiously, Matthew is the only gospel writer to mention dreams.  In Matthew the people who dream dreams are Joseph the adoptive father of Jesus, the wisemen (I think there were five of them), and Pilate’s wife. Matthew’s gospel speaks of six separate dreams,
five of them in the context of Jesus’ birth in only 28 verses (Matt. 1:20; 2:12, 13, 19, 22; 27:19). Joseph of Nazareth experienced four dreams recorded in Scripture, more than any other biblical character.

The dreams of Matthew aren’t primarily predicting the future, they are giving guidance, in each instance somehow protecting Jesus.  Joseph’s dreams tell him: 1) Marry Mary, 2) Go to Egypt, 3) Return from Egypt, 4) Go to Galilee.  The wisemen are told not to go back to Herod, and Pilate’s wife warns her husband to “have nothing to do with Jesus” (which Pilate ignores–how would things have been different if he had followed her advice?).  All the dream warnings surrounding Jesus’ birth are heeded.  Praise God that these people took dreams seriously.

Why does Matthew uniquely have so many dreams, particularly surrounding the birth of Jesus?  I don’t know. But I do know God still speaks through dreams, and as we reflect on the birth of our saviour during this season of Advent, ask God to guide you as he did Joseph and the wisemen while you sleep.

Why three?  I think there were five.

We Five Kings of Orient Are…

Now after Jesus was born in Bethlehem of Judea in the days of Herod the king, behold, wise men from the east came to Jerusalem…10 And behold, the star that they had seen when it rose went before them until it came to rest over the place where the child was.  10 When they saw the star, they rejoiced exceedingly with great joy. 11 And going into the house they saw the child with Mary his mother, and they fell down and worshiped him. Then, opening their treasures, they offered him gifts, gold and frankincense and myrrh. 12 And being warned in a dream not to return to Herod, they departed to their own country by another way. (Matthew 2:1, 10-12)

Notice, Matthew never says how many wise men there were.  In Eastern Christianity, the number is often twelve, according to Wikipedia (which is never wrong).

Why do we think there were three?  There were three gifts (2:11). We assume each wise man brought one gift–one brought gold, one, frankincense, and one, myrrh. But just because three things listed doesn’t mean each brought something separate. Five magi could have gone in on three gifts, or there may have been three separate gold gifts.

Do any of you who are parents ever go in together on a gift for one of your children? In the context of these wise men, it makes more sense to give communal, not individual gifts.

I think there were five.

At our church (Calvary of Souderton), a few years ago there was a Christmas competition where teams had to answer questions about the Bible. One of the questions asked, “How many wise men were there?” Possible answers: 2, 3, 4, or unknown.  My son Noah’s team instantly said, “3.”  Noah said, “We don’t know.” They didn’t believe him at first, but he continued, “Trust me.  My dad’s a Bible nerd.” Noah’s team was the only one to get the question right. Sometimes it pays to be a Bible nerd.

Why should we care if there were three or five? I’m really not trying to ruin it every time you sing “We Three Kings” I like the song, and there may have been only three. But I think it’s important as we reflect on the Christmas story to read our Bibles carefully, to not make things up, even things repeated in a popular song. We should expect to learn something new about Jesus’ birth at Christmas.

What unexpected lessons can we learn from the story of the five wise men?  I see three (not five).

First, wise men, and wise women, follow God’s direction. These wise men followed a divinely given star at the beginning of the story (2:2, 10), and a divinely given dream at the end (2:12).  Let’s expect God to guide us in unexpected ways this Christmas season.

Second, wise men, and women, travel to meet Jesus. These wise men came from lands east of Jerusalem. We’re not sure where they were from exactly, but lands east of Jerusalem today include Jordan, Iraq, Iran, and Syria. Some of the first people to meet Jesus were from lands that are now Muslim. They still need to meet Jesus. These countries are often considered to be our enemies, but even if they are, thirty years after his birth the Prince of Peace told us to pray for our enemies. Over a quarter million people have died in the past few years in the war in Syria. Let’s pray for peoples east of Jerusalem this Christmas season, particularly ones in Syria, and ask God to guide us (see lesson #1) how he wants us to care for them.  (More about Syria in the next blog.)

Third, wise men, and women, fall down and worship Jesus.  That’s what these wise men did.  Ultimately, the story is about Jesus and our adoration of the incarnate king, born to serve, die, and rise again.

Expect the unexpected when Jesus arrives on the scene. For Christmas, you might be planning for three guests, but get five instead.