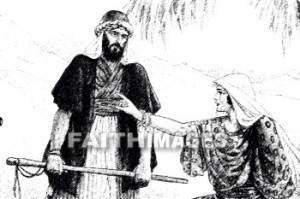 Yes, Barak.  I spelled it right.  You’re thinking of Barack.  I want to talk about the other one, the famous one, the one in the Bible (no “c”).

Barak was Israel’s military leader during the period when Deborah was judge over Israel in the fourth chapter of the book of Judges.

In my class on Monday, we were discussing Judges 4 when one of the students said that Deborah shouldn’t have been the leader because she was a woman.  Men like Barak should have been in charge.  The fact that a woman was leading was an indictment against the men.

4 Now Deborah, a prophetess, the wife of Lappidoth, was judging Israel at that time. 5 She used to sit under the palm of Deborah between Ramah and Bethel in the hill country of Ephraim, and the people of Israel came up to her for judgment. 6 She sent and summoned Barak the son of Abinoam from Kedesh-naphtali and said to him, “Has not the LORD, the God of Israel, commanded you, ‘Go, gather your men at Mount Tabor, taking 10,000 from the people of Naphtali and the people of Zebulun. 7 And I will draw out Sisera, the general of Jabin’s army, to meet you by the river Kishon with his chariots and his troops, and I will give him into your hand’?” 8 Barak said to her, “If you will go with me, I will go, but if you will not go with me, I will not go.” 9 And she said, “I will surely go with you. Nevertheless, the road on which you are going will not lead to your glory, for the LORD will sell Sisera into the hand of a woman.”  (Judg. 4:4-9 ESV)

We discussed whether or not Barak and Deborah were good leaders.

Here are the 5 things we talked about from the text.

1) Barak may have been punished for pleading that Deborah come along on his mission (4:9). The NIV makes this explicit, but other English translations (ESV, NRSV, NAS) don’t, nor does the Hebrew text.  On the positive side, Barak is less reluctant than Gideon (Judg. 6), and he does obey and defeat the Canaanites.  There is nothing clearly wrong with Barak’s behavior here.  Our assessment of Barak’s leadership is positive so far based on his overall obedience, but let’s wait on more data for definitive conclusions.

2) Deborah was a real prophet.  What she said came true (Israel would defeat the Canaanite Sisera and he’d be killed by a woman), so according to the definition of Deuteronomy 18:22, she’s a true prophet since what she says comes true.

3) Deborah was raised up by God to lead the people.  Although it doesn’t state that explicitly in Judges 4, earlier in the book it makes it clear that judges were raised up by YHWH (Judg. 2:16), and she was clearly a judge.  Her judge cycle fits the pattern of the rest of the book, so it’s safe to say God raised her up to judge the nation.

4) Deborah and Barak wrote a chapter of the Bible.  Judges 5 is their song.  Although, as you read it, Deborah was clearly primary, and Barak secondary, a bit like some of Paul’s letters where he mentions someone else at the beginning like Sosthenes (1 Cor. 1:1) or Timothy (2 Cor. 1:1), but it’s pretty clear that Paul was primary.  So, if they wrote Scripture, that’s got to be considered a positive thing, an argument that Deborah and Barak were good leaders. (I know the apostate Solomon supposedly wrote a lot of Wisdom books, but he did get off to a great start in 1 Kings 3.)

5) Barak is remembered positively elsewhere in Scripture among lists of judges.  He’s mentioned favorably by Samuel in 1 Sam. 12:11 (LXX, Syriac; Heb has “Bedan” which doesn’t make sense so most English translations go with “Barak”- ESV, NIV, NRSV), as being sent by God.  He’s listed among the faithful judges in Heb. 11:32, with Gideon, Samson and Jephthah.  If the rest of Scripture speaks of him positively, then that seals the deal.

Barak and Deborah are clearly perceived positively in the text.  They were good leaders. There’s nothing in the text to suggest that the woman Deborah should not have been leader, or that the man Barak should not have listened to her.  She was a prophet.  He was obedient.  She was raised up by God.  They wrote Scripture.  He was remembered positively.  It’s all positive.

What can we learn from Barak’s example?  We need more men in the church today like Barak who are willing to listen to, to learn from, and to follow after Godly women.

What would you have said to this student?

.
3) The Former Prophets (within the Jewish tradition).  The Latter Prophets are also known as the Major and Minor Prophets.

One of the reasons the title Prophets makes sense for these books is that there are a lot of prophets mentioned.  Well, not really in the books of Joshua and Judges, but in Samuel there’s a fair amount, and in Kings there are tons (literally).  Hundreds of prophets are mentioned in the book of kings.

As I study, research and write about these books, I like to make charts and tables.  Here is a link to my family tree of the Kings of Israel and Judah.

I’ve included a table below that will appear in some form in a couple of books I’m working on, but those versions won’t be in color.  The title: Prophetic Figures in Deuteronomy and the Deuteronomistic History (Joshua-Kings).  Prophetic figures include people the text calls a prophet,  a “man of God,” and several prophet groups (sons of the prophets).

The left column lists all the biblical references.
The middle column includes the prophetic figures, in red when the text provides a name, gray if anonymous, and pink for prophetic groups.
The right column lists the king (only for Samuel-Kings) who reigned while the prophet ministered.  The color coding, green for United Monarchy, blue for the Northern Kingdom (Israel) and yellow for the Southern Kingdom (Judah), matches the color coding used for the Family Tree chart mentioned above.

What observations and patterns do you notice about these prophets and kings?  Add your thoughts in a comment below.  In my next blog in a few days I’ll share a few of my own comments.

If you know people who study the Bible seriously, send them a link to this table.  They’ll find it helpful. 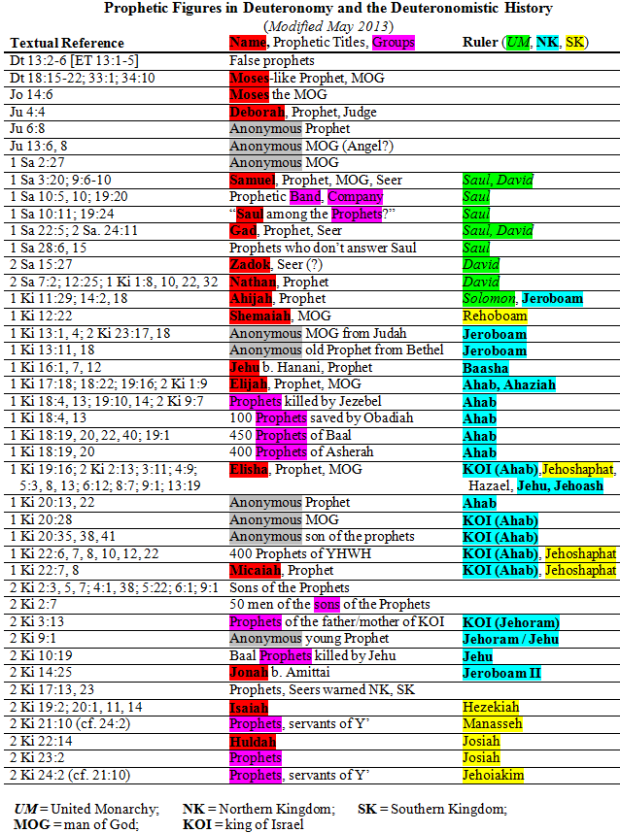