Who did Republican Gerald Ford ask to give his homily at his funeral?  None other than the man who prevented him from being re-elected in 1976–Democrat Jimmy Carter.

Who did Democrat Bill Clinton call late at night to ask questions regarding foreign policy?  None other the man who resigned in shame after Watergate–Republican Richard Nixon.

Who did the Republican Bush clan refer to as the “Brother of Another Mother”?  Democrat Bill Clinton.

Who did Democrat Harry Truman call “one of my closest friends”?  None other than the man Truman’s predecessor FDR blamed for the Great Depression–Republican Herbert Hoover.

Hard to believe, but true. 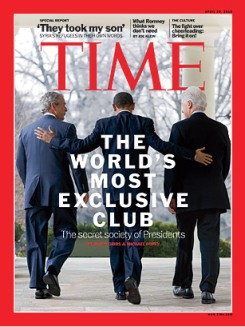 To hear the full story behind these unbelievable factoids, you’ll need to read The Presidents Club: Inside the World’s Most Exclusive Fraternity by Nancy Gibbs and Michael Duffy (Simon and Schuster, 2012).  Gibbs and Duffy are editors at Time.  The April 23, 2012 edition of the magazine included an excerpt from the book, and guaranteed a trip to the NY Times bestseller list by putting a photo of Obama (44) with his arms around Bush (43), Clinton (42) on the cover (click here).

I mentioned the book in an earlier blog on Missional Presidents and Missional Partnerships, where I give a call to Christians to follow the example of these presidents and work together with Christians from other faith traditions.

The Presidents Club tells a story involving compelling history, fascinating research and bizarre politics.  My only critique is that after describing many powerful cross-party partnerships involving shocking friendships, Gibbs and Duffy could have got on a soap box and delivered a message to the highly politicized world of Washington gridlock in 2012: “Work together to accomplish great things for the nation.”  Bump, Set, but no Spike.

If you’ve read it, what did you think?

If you haven’t, why not?