David committed murder and adultery and he was allowed to remain as king, but Saul performed a premature sacrifice and he lost the throne.  What’s up with that?  Why was God so mean to Saul?

Here are the earlier two posts where I discuss why God judged Saul so severely.  Part 1.  Part 2.

But perhaps the most troubling aspect of Saul’s narrative involves God’s command to Saul through the prophet Samuel to destroy the Amalekites (1 Samuel 15).

Thus says YHWH of armies, “I will punish the Amalekites for what he did in opposing the Israelites when they came up out of Egypt.  No go and attack Amalek, and utterly destroy all that they have; do not spore them, but kill both man and woman, child and infant, ox and sheep, camel and donkey.” (1 Sam. 15:2-3).

There are two problems associated with this incident.

I addressed the first problem of God commanding the slaughter in my blog interview with Frank Viola recently, so I’ll just include the link to that here.  Here is the related link to my Relevant Magazine article on the Canaanite genocide (pages 108-111). 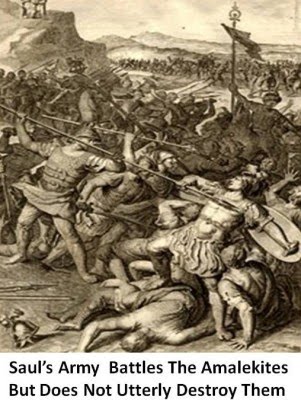 But what about the 2nd problem–why does God condemn Saul for not completely destroying the Amalekites?  Shouldn’t God affirm Saul for showing mercy?

There are three points to make here in response to this problem.

First, Saul wasn’t showing mercy to the Amalekites.  He didn’t save the women and children.  He saved the king and the livestock.  He saved the king probably to not set a precedent for regicide (that can come back to haunt a king later on).  He said he saved the cattle to sacrifice them to YHWH, but that doesn’t make any sense because YHWH already told him to sacrifice them.  He was probably saving them to enrich his own flocks and herds.  (Although, Saul does show mercy to the Kenites.)  Saul was showing mercy to Saul.

Second, Saul was condemned for blatant disobedience.  God had told him what he wanted to do and since the execution of this command was performed by the army, the nation was aware of the command.  Saul’s disobedience was public and obvious.  He was modeling disobedience for the nation.  For a nation who struggled to trust God and obey, it was intolerable to have a ruler who could follow God’s commands.

Third, Saul had disobeyed before and hadn’t learned from it.  This was Saul’s second offense (so, two strikes and you’re out).  Even in our legal system, repeat offenders are punished more severely.  It makes sense Saul was punished for his incomplete slaughter.

Remember, God didn’t remove Saul from the throne instantly (but he did send an evil spirit: 1 Sam. 16:14–huh?), but the main punishment for Saul was that his son Jonathan was not able to rule after him.

What do you think about God sending an evil spirit to Saul?  Has God ever done that to you?