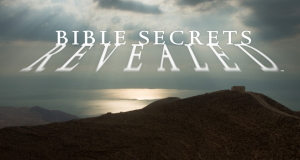 “Is it possible that the Exodus never happened at all?”

Just to be clear, I think it did (although we might quibble about some of the details), but I thought I should start my blog on Part Two of The History Channel’s Bible’s Secrets Revealed in a sensationalized manner consistent with the series.  For my review of part one, “Lost in Translation” click here.

Part Two examined the issue of “The Promised Land“.

The historicity of the Exodus is one of several controversial subjects discussed in this episode.

On the positive side, a greater diversity of views were engaged with in Part 2, than in Part 1. I’m guessing a bit here about the scholars’ theological/ideological biases because it’s hard to make definitive conclusions from tweet-sized sound-bites, but there appeared to be Jewish, Muslim, Christian, agnostic and atheist. The wide range of perspectives was refreshing, even the ones I didn’t agree with, although I found a higher percentage with whom I resonated this time.

On the negative side, I find it curious (or perhaps hypocritical?) that certain scholars (i.e., Richard Dawkins, who doesn’t appear to be interviewed for this series) who argue for non-literal or non-historical interpretations of the biblical text in many places, take the most severe, literal interpretation of problematic texts like the Canaanite Conquest / Genocide texts (for my perspective on this topic see my Relevant Magazine article here, “Reconciling the God of Love with the God of Genocide“).

For example, in Part 2 Reza Aslan said that God commanded his people to destroy everything as they entered Canaan, “every blade of grass.”  Aslan (the scholar, not the lion), is a professor of creative writing at UC Riverside and author of the rather creative book Zealot: The Life and Times of Jesus of Nazareth, had several other creative things to say about the Exodus. I’m sure his provocative perspectives are the reason he was selected for this documentary.

Yes, the commands to wipe out the Canaanites are shocking to us today.  But they wouldn’t have been in the ancient Near Eastern context.  That’s just what was done.  The Assyrians and the Moabites (see the Mesha Stele for example) bragged about doing worse things. Although, as recently as 150 years ago in the US, we did something similar to the Native American population in the 19th century.  Read my article if you want more thoughts on the Canaanites.

What lurks behind some of our critiques of these things in the Bible is a cultural arrogance that, let’s face it, Americans are guilty of whenever they travel abroad.  “If it doesn’t make sense to us, it must be wrong.”

I’ll keep watching the series, enjoying bits, being frustrated about bits, and blogging about it.

Did you watch?  What did you think?